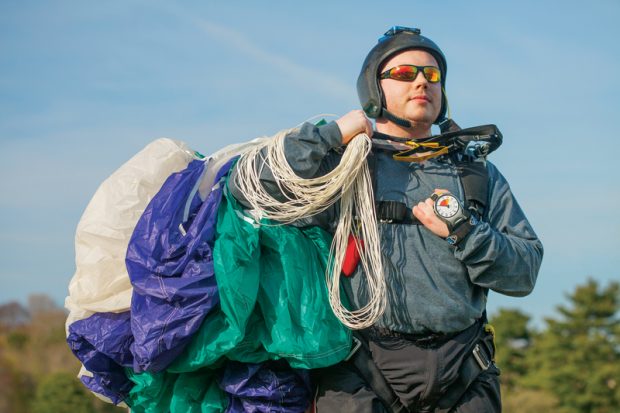 With 1,000 jumps under his belt, Brian Moriarty embarked on what seemed to be a “routine and unremarkable” jump on a beautiful June day.

For Brian Moriarty, 30, defying gravity has been a lifelong quest. He earned his pilot’s license at age 17 and began skydiving at 19. Moriarty enjoys parachuting off of bridges, buildings and cliffs.

“It’s the exhilaration, adrenaline, knowledge and skill necessary to take something so inherently dangerous and make it routine,” says Moriarty, who works as a paramedic. He describes skydiving as a meditative experience “where you are forced to focus on what is taking place in the moment and be consumed in it 110 percent.”

In 2015, with 1,000 jumps under his belt, Moriarty embarked on what seemed to be a “routine and unremarkable” jump on a beautiful June day in upstate New York.

“Everything I know of that day has been told to me,” says the New Providence, NJ, resident. “I have no recollection of that dive. I was flying a small, high-performance parachute, which was unforgiving of errors. It seemed like I was in a turn too low and could not level out in time.”

Onlookers estimated that Moriarty, who was jumping from 13,500 feet, struck the ground face-first at roughly 30 mph. While an ambulance was called immediately, “most of my friends thought they had witnessed an unsurvivable impact.”

After losing consciousness for several minutes, he woke up and, remarkably, gave his phone password to the EMTs and directed them to call family and friends. Fortuitously, the nearest medical helicopter in the area had originated from the same New Jersey hospital where Moriarty worked. His shocked colleagues transported him to the Level I trauma center at Westchester Medical Center, the flagship of the Westchester Medical Center Health Network (WMCHealth).

“I had broken everything between my knees and neck,” Moriarty says. “Actually, broken isn’t the right word. I shattered my femur into six pieces.”

According to David Asprinio, MD, Director of Orthopedic Surgery at Westchester Medical Center, Moriarty’s astonishing litany of injuries also included an “open book” pelvic fracture, which may have a 50 percent mortality rate when associated with low blood pressure and shock. “He suffered a spinal-pelvic dissociation, meaning the top half of his body had separated from the bottom half,” Dr. Asprinio says.

Putting Him Back Together

Shortly after Moriarty’s arrival at Westchester Medical Center, Dr. Asprinio repaired his femur. The remainder of the required surgeries would have to be put on hold, however, as Moriarty contracted pneumonia, and then sepsis, due to the extensive lung damage he sustained. “His temperature hovered at 104 for two weeks,” says Dr. Asprinio. To help Moriarty’s body heal, he was placed in a medical coma. 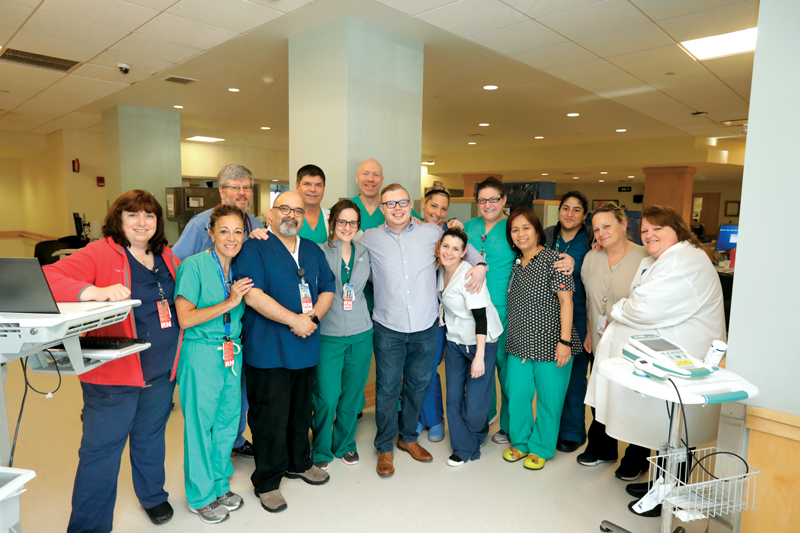 Brian (center) is extremely grateful for the trauma care team at Westchester Medical Center. They gave him a new chance at life and Brian returns often to visit. Photo By Kenneth Gabrielsen

Once Moriarty’s sepsis was controlled, Dr. Asprinio continued quite literally putting him back together. He performed a 16-hour surgical procedure to repair his complex pelvic fracture and reattach his spinal column to his pelvis.

Six months and nine days after the accident, Moriarty was discharged and underwent outpatient rehabilitation therapy near his home.

“Brian is a great example of the types of injuries we can treat here at Westchester Medical Center,” says Dr. Asprinio. “We have the capability of treating very complex orthopedic and traumatic conditions. In addition, Brian had a very strong support system and was a highly motivated patient. He did remarkably well, given the level of injuries he sustained.”

“I am 95 percent what I was before, and I’ve returned to work full-duty as a paramedic,” Moriarty says.

While the experts at Westchester Medical Center gave him a new chance at life, he also made a lasting impression on them and returns for regular visits. “All things considered, he healed remarkably quickly – nothing was going to stop him,” said Terry Rattigan-Davis, Nurse Manager in the hospital’s Trauma Intensive Care Unit. “He made a lot of friends here, and we’re all proud and happy he did so well.”

Beyond the Drop Zone

Though Moriarty has not skydived since the accident, he is now taking a different “leap of faith.” Inspired by the care he received from Dr. Asprinio and the hospital team, Moriarty is embarking on a new career path. “I’m now pursuing a post-baccalaureate pre-med requirement and taking my MCAT to apply to medical school,” he says. “I want to be able to give people like me the second chance that I got.”

0
How can I prepare my child for the transition back to school?
WMCHealth Commemorates ‘Donate Life Month’