What You Need to Know to Understand Alzheimer’s 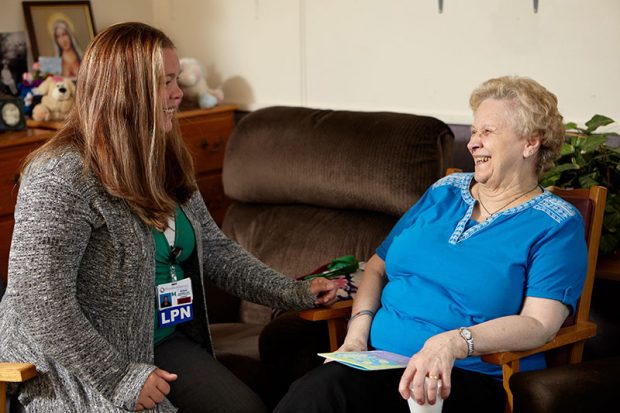 An expert from Mountainside Residential Care Center in Margaretville sheds light on this devastating disease.
By David Levine

In 1983, President Ronald Reagan designated November as National Alzheimer’s Disease Awareness Month. According to the Alzheimer’s Association, at that time, fewer than 2 million Americans suffered from this devastating disorder; today, that number has nearly tripled, to almost 5.4 million. The most common form of dementia, Alzheimer’s, which later claimed Reagan’s life, is defined by severe memory loss and other cognitive impairments that interfere with daily life. People with the disease may eventually forget even important people in their lives and undergo dramatic personality changes.

At Mountainside Residential Care Center in Margaretville, a member of the Westchester Medical Center Health Network (WMCHealth), at least 50 percent of residents have some form of dementia. According to Robin Hodges, in-service coordinator at Mountainside, monthly Alzheimer’s and dementia trainings are conducted for all staff, including those in the nursing, dietary and housekeeping departments. These monthly trainings focus on different topics, including the effects of Alzheimer’s on day-to-day activities and communication. “We find out what the residents did at home before their diagnosis,” says Hodges. “We try to keep a routine for them to reduce their anxiety.”

Q: How important is early detection?

A: Early detection helps immensely. There are medications that can temporarily ameliorate symptoms. Depending on the person, these can help people with Alzheimer’s improve function for the short-term. But family involvement in the early stages is the biggest help — to aid in recognizing signs, asking questions and understanding more about the disease.

Q: How can you tell if forgetfulness or other difficulties are from Alzheimer’s?

A: The signs and symptoms have to be new or different. If your loved one was forgetful or not able to coordinate plans in their 20s and 30s, it’s probably not a problem in their 40s or 50s. But, when issues begin to affect their daily routine, see a doctor and describe where problems are occurring. Blood tests and other assessments are used to confirm a diagnosis.

Q: Is there a cure for Alzheimer’s?

A: There is currently no cure for Alzheimer’s and no way to stop the death of brain cells. But many new medications are currently in trials, with hopes that they will be highly therapeutic, especially if the disease is caught early enough. There have been some breakthroughs already, and the more we know, the better we’ll understand who is at greatest risk. I am optimistic because people are more aware; they are not hiding it. They are more willing to talk to their doctors, and more families are involved with their loved ones’ care.

10 Early Signs and Symptoms of Alzheimer’s