The Mother of Three Who Cheated Death 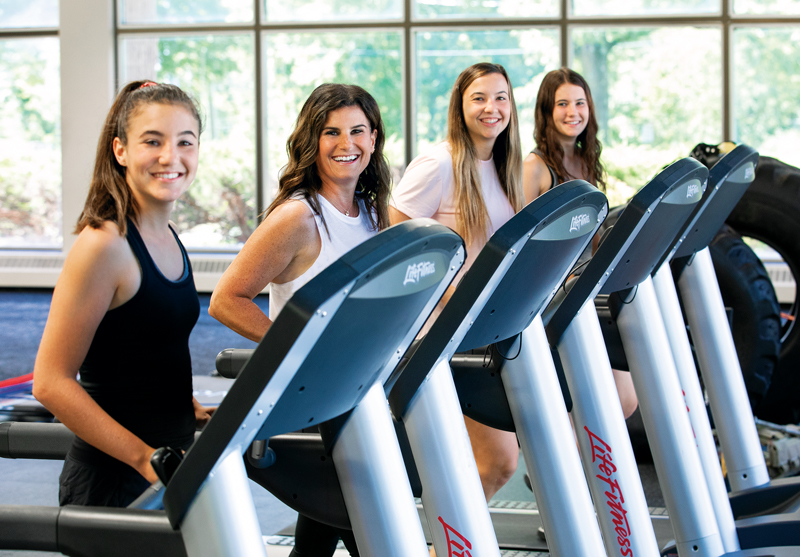 Physicians at the WMCHealth Heart and Vascular Institute — and caring community members — save this woman from a potentially deadly heart condition.

Had Gabrielle Fisher’s sister and husband waited just an hour longer to bring her to the hospital one Sunday last May, she would not have been on the operating table when her aorta ruptured.

The Purchase resident experienced an aortic dissection, a rare condition that affects around 200,000 people in the United States every year and causes immediate death in about 40% of patients.

The typical aortic dissection patient is a male in his 60s with high blood pressure, not a healthy 46-year-old woman who works out almost every day.

Fisher inherited the condition from her father, who experienced an aortic dissection at age 37 and later died from it at age 70. Fisher’s father’s cardiologist told the family that the condition was hereditary and urged her, her younger sister and her three teenage daughters (Nellie, 17; Bailey, 16; and Josie, 14) to undergo a baseline scan and monitor the condition for life.

But their insurance company would not cover the cost of the CT scans. Because everyone felt healthy, they all but forgot about the cardiologist’s cautionary advice until the night before Fisher was to host a gathering in her home. She tossed and turned all night during a fitful sleep.

For the first time in her life, she experienced what she called a panic attack, but not the typical symptoms of someone with a life-threatening heart condition. Though she vomited and began acting strangely, she refused to go to the hospital – against husband Brian’s wishes.

“I didn’t feel a rip or tear in my heart or any pain in my chest or back,” she said. “Since I wasn’t doubling over in pain, it was hard to determine when to go the hospital.”

But then she began to demonstrate stroke-like symptoms and became confused about basic things, like the gathering she was scheduled to host.

“Brian and my sister said, ‘This is getting weird. We don’t care what you think; we’re going to the hospital now,’” she says.

Doctors at a local hospital examined her and told her: “You must get to Westchester Medical Center immediately,” she recalls. After reviewing Fisher’s CT scan and additional imaging, Dr. Goldberg confirmed the aortic dissection and rushed Fisher to surgery.

“Our cardiac surgery team has some of the most extensive aortic disease experience in New York, if not the world,” says Dr. Goldberg. “We’re comfortable dealing with very complex situations.”

The aorta, the main artery that carries blood from the heart, contains several layers. When an aortic dissection occurs, the inner lining peels away from the second layer, allowing blood to flow into the opening and causing further separation of the inner lining along the length of the aorta. This is a very dangerous situation that can result in aortic rupture, heart attack, stroke or lack of blood flow to other organs.

Fisher probably had the aneurysm much of her adult life but never knew it, said Dr. Goldberg. The real danger occurs, he explains, if it bursts.

Though alert during the ambulance ride, Fisher remembers nothing, except that the Westchester Medical Center cardiac team went to work the second she arrived.

Dr. Goldberg, who had been on call that day, and the surgical team did what they normally do in these situations: spring into immediate action.

“The nurses, the doctors, everybody was there before I got there on a Sunday, and they spent 11 hours saving my life,” said Fisher. “I feel incredibly lucky, like someone was watching over me.”

“This is what we’re here for,” said Dr. Goldberg. “It’s like when the firehouse alarm goes off and everyone slides down the pole.”

Shortly after the surgery began, her aorta ruptured, which, at any other time, would have caused immediate death. After the surgery, Fisher spent eight days in the hospital, as opposed to the typical recovery time of three weeks or more.

She attributes this to being physically fit and also to Dr. Goldberg and his “incredible” team. “He has an amazing bedside manner,” said Fisher, a self-described soccer mom. “He’s easy to get in touch with, even though the worst is over.” She also received care from Tanya Dutta, MD, noninvasive cardiologist and Director of Echocardiography, and Sateesh Babu, MD, Chief of Vascular Surgery at Westchester Medical Center.

Unaware of the situation’s urgency, some of Fisher’s friends asked why she didn’t go to New York City for care. Her response is simple: “Dr. Goldberg, Dr. Dutta and Dr. Babu have given me top-notch care.”

So far, Fisher’s recovery has been relatively seamless. “I still work out five or six days a week, and there’s no indication that anything ever happened,” she says. “I cheated death, so I feel extremely blessed to be able to go back to my regular life.”

As for her family’s future care, Nellie, Bailey and Josie will start getting screened for aortic disease before they go to college (which will be next year for Nellie), ensuring that there’s no enlargement around the aorta.

They will get a CT scan to determine a baseline before their lives “get crazy,” says Fisher. “We will be aware and vigilant. We’re lucky to be on top of it for them. If there’s a problem, we can do something about it.”