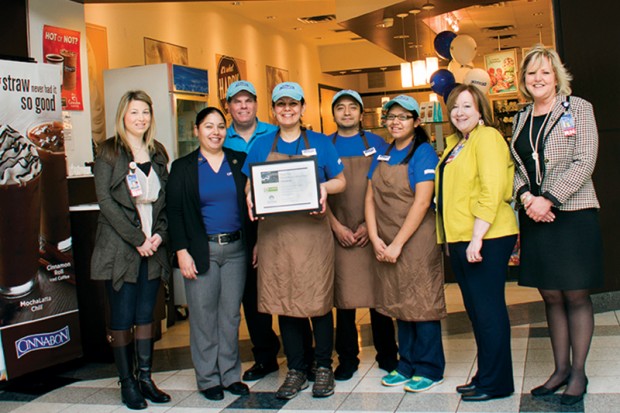 Recently, Westchester Medical Center nurses and nurse managers visited Cinnabon in The Galleria at White Plains to present franchise owner Dan Ventarola and his team with an honorary DAISY award. DAISY awards are given out by the DAISY Foundation at 1,900 hospitals nationwide to recognize excellence in nursing.

Cinnabon is the DAISY Foundation’s lead sponsor and donates freshly baked Cinnabons to WMC’s monthly DAISY award ceremonies. The honorary award acknowledged the important role Ventarola plays in making those ceremonies happen. Erin Facelle, RN, Pediatric Nurse Manager at Maria Fareri Children’s Hospital at Westchester Medical Center, says the award was a way “to say thank you to Cinnabon and the local franchisee and to let them know how much we appreciate their ongoing support of our nurses and this important recognition program.”