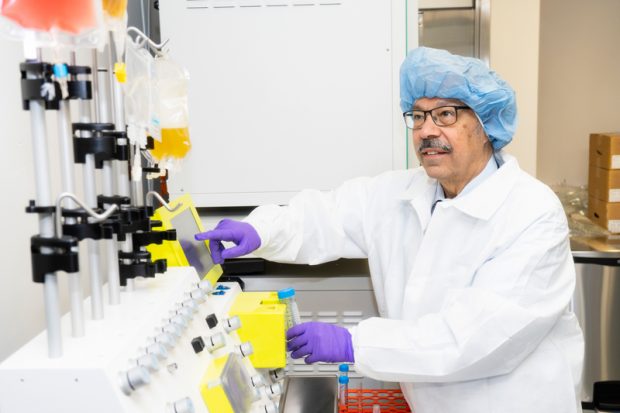 Creating, improving and custom-packaging a product under the highest standards of manufacturing is good practice. But when that product is the human cell, such improvements can help fight disease, repair damaged tissue and save lives.

For more information on the Cellular and Tissue Engineering Laboratory, call 914.493.7997 or visit mariafarerichildrens.org/hematology-oncology.

All pediatric and adult blood- and marrow-transplantation programs and other regenerative and cellular therapy programs at Westchester Medical Center and Maria Fareri Children’s Hospital rely on cell manufacture and processing in the CTEL.

“Because it is more targeted to the specific disease, cellular therapy often means better responses, better survival rates and fewer side effects,” says Dr. Cairo, who cites sickle cell disease as an example.

“Historically, the only cure was a bone marrow transplant from a healthy-tissue-matched sibling,” he says. “But only one in six patients has eligible siblings who are a tissue match.” Dr. Cairo has led a national, federally funded trial that collected the peripheral blood stem cells of the patients’ parents and re-engineered the stems in the CTEL before they were administered to the parents’ child with sickle cell disease.

In the CTEL, his team focuses on cells that are key to repopulating bone marrow and re-engineering them with immune cells while removing the harmful cells. Patients receiving the transplant have a survival and cure rate of 90 percent, with improved quality of life.

Another successful form of therapy involves treating immunosuppressed patients. “For patients with poor survival prospects because they’ve exhausted traditional therapies, we’ve developed a process that several other centers are following,” says Dr. Cairo. It involves collecting immune cells from a patient, capturing and isolating their disease-fighting cells and returning them to the patient, to enhance his or her ability to fight the virus. “This process is completely safe, with a 100 percent success rate, and is saving lives.”

One method of regenerative therapy involves isolating, purifying and augmenting a specific population of existing cells to enhance their ability to target specific cardiac and neurological diseases. Another technique changes the genetic material within cells, repairing or replacing defective genes to alter the cell’s function or the way it targets disease. Still another recruits a population of cells early enough in development to give rise to other cells that play a role in the healing process. With this type of cell recruitment, those replacement cells repair damaged tissue or suppress an abnormality.

“The work of our laboratory is especially gratifying because it translates directly into patient care,” says Dr. Cairo. “These breakthroughs are unlocking highly personalized courses of treatment and bringing new hope to many of our most challenging patients, who have not found success with more standard and traditional therapies.”

0
Here's What You Need to Know When Dealing With Postpartum Depression
What Are the Best Ways to Barbecue Safely?